Swift, iOS, OS X, all the frameworks, the LLVM compiler, Xcode, and everything else is, or tries very much to be, magic. Light, easy-to-use magic is generally the best kind, but underneath the shiny new magic of Swift or the new frameworks is often dark and frightening magic, such as LLVM, CoreFoundation, the Mach kernel, BSD, all kinds of nasty libraries, and the x86 or ARM CPU itself.

This talk is about peeling back the curtain on some of the darker magic. I aim to cover some lighthearted debugging and profiling with Xcode and Instruments, some CoreFoundation cave-diving, the structure and binary interface of compiled programs, and what happens to a running system when the swap file mysteriously disappears.*

*Due to time constraints, this last item might not be demonstrated. 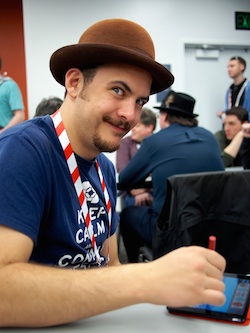 Josh graduated with his PhD in Mathematics from the University of Tasmania in August, and has been working at Google in Sydney since the start of the year. He’s given talks at /dev/world for several years, and has programmed a few successful iOS apps.